Vitamin B1, also known as Thiamine, is one of the eight essential B vitamins that help the body convert food (carbohydrates, fat, and protein) into energy.

The primary role of the B1 vitamin is to create energy from carbohydrates.

It was named B1 because it was the first B vitamin found within the body.

In the body, particularly high concentrations of Thiamine are found in skeletal muscles and the heart, liver, kidney, and brain[1].

Vitamin B1 is very important for the brain that uses it in glucose metabolism[2].

If your diet is rich in simple carbs, you will need to consume more of this vitamin.

Thiamine plays a vital role in the metabolism of glucose; this means that eating excessive simple carbohydrates increases the need for this vitamin.

High-calorie malnutrition is commonly associated with related thiamine deficiency, regardless of its fortification in food substances[3].

Caffeine has a mild diuretic effect. Water-soluble vitamins, such as the B-vitamins, can be depleted as a result of the fluid loss.

Also, it interferes with the metabolism of some B-vitamins, such as Thiamine[4].

Chemicals in coffee and tea called tannins can react with Thiamine, converting it to a form that is difficult for the body to take in and could lead to Thiamine deficiency.

Interestingly, Thiamine deficiency has been found in a group of people in rural Thailand who drink large amounts of tea(>1 litre per day) or chew fermented tea leaves long-term.

However, this effect hasn’t been found in Western populations, despite regular tea use.

Researchers think the interaction between coffee and tea and Thiamine may not be significant unless the diet is low in Thiamine or vitamin C.

Vitamin C seems to prevent the interaction between Thiamine and the tannins in coffee and tea[5].

Because thiamin can only be stored in the body for a short time before it is readily excreted, a regular dietary intake of thiamin is necessary to maintain the proper blood levels.

Nearly all living tissues contain Thiamine, and some thiamine is therefore derived from almost all substances consumed as food.

It is only with refined cereals, i.e. white flour, white rice, cereal starches, cassava and sago, as well as in products made from them, that the thiamine content is too low[6].

Long term deficiency in B1 vitamin

Beriberi was a particularly problematic disease in countries that depended very heavily on the intake of rice and who began to polish the outer layers off of the rice prior to cooking.

Since B1 was contained in these outer layers, they were polishing off the B1 as well.

Beriberi is characterized by impairment of the nerves and heart.

General symptoms include loss of appetite and overall exhaustion, digestive irregularities, and a feeling of numbness and weakness in the limbs and extremities. It is rapidly fatal unless specific therapy is given.

Vitamin B1 and mosquito bites

There are some claims that B1 can protect you from mosquito bites, but the research does not confirm these claims. 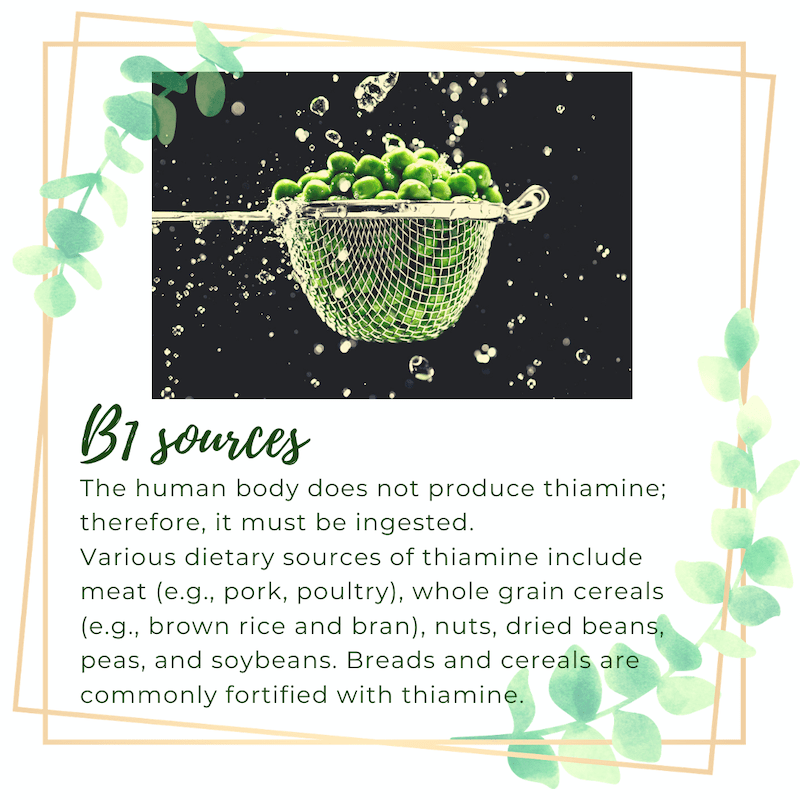